Ken Fish is a native of the Los Angeles area and an honors graduate of Princeton University with a degree in History and Philosophy of Religion. He concentrated on the writings of the early church fathers, the history of late antiquity and of the early middle ages. He subsequently earned his Master of Divinity degree from Fuller Theological Seminary with emphases in theology and intercultural communications. He also holds an MBA in finance and strategy from UCLA’s Anderson Graduate School of Management. Ken has over 20 years of experience as a senior executive with Fortune 500 corporations specializing in corporate strategy, mergers and acquisitions, corporate finance, financial management and organizational transformation.

Throughout his life, Ken has worked with churches and parachurch ministries, and in the 1980s he worked full-time for John Wimber for several years at Vineyard Ministries International (VMI). Among his duties at VMI, he worked on various aspects of the conferences that were a hallmark of the early Vineyard movement, including researching and ghost-writing for John Wimber. He has traveled extensively as a conference speaker, teaching on wide variety of topics ranging from leadership and spiritual formation, church growth and revival, biblical authority and exposition, to prophecy and healing and deliverance. 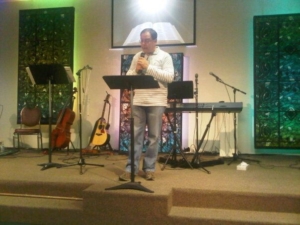 Ken has taught extensively in Australia, working alongside churches as diverse as Anglican, Assembly of God, Baptist, Catholic, Foursquare, Lutheran, Methodist, Nazarene, Presbyterian, Vineyard, and non-aligned Pentecostal. His work includes vision-casting, teaching on leadership and awakening themes, equipping the saints to further the advance of the Kingdom of God, and releasing fresh anointing in the midst of visitation. In addition to his work in Australia, Ken has also ministered in over 50 other nations. He has been a guest on The Eric Metaxas Show, Premier (UK), Fire Starters, and Remnant Radio. He has also been invited to address national gatherings of prophetic and apostolic leaders on topics such as, “What is a Real Prophet?” and “The Hallmarks of an Apostolic Church.” He has led training events for the International Association of Healing Rooms in both the Eastern and Western US. These meetings are often accompanied by manifest signs and wonders that include prophetic ministry and healings of many types. Ken’s material has been honed over many years, and he has a humorous teaching style that emphasizes both information and impartation.

Orbis Ministries, Inc.TM is founded on the belief that the suffering of Jesus Christ will ultimately result in the manifold wisdom of God being displayed to the world through his people, the Church, which is the body of Christ (Eph. 3:10).

We are using cookies to give you the best experience on our website.
You can find out more about which cookies we are using or switch them off in settings.

This website uses cookies so that we can provide you with the best user experience possible. Cookie information is stored in your browser and performs functions such as recognizing you when you return to our website and helping our team to understand which sections of the website you find most interesting and useful.

You can adjust all of your cookie settings by navigating the tabs on the left hand side.

Strictly Necessary Cookie should be enabled at all times so that we can save your preferences for cookie settings.

If you disable this cookie, we will not be able to save your preferences. This means that every time you visit this website you will need to enable or disable cookies again.